Prologue
Day 1: 13 Sep, Singapore to Malacca. This is my 14th charity ride. Or is that 15th? There are two rides this weekend: one in Malaysia, one in Indonesia. When I signed up for both, they were in separate months, but because of the haze, the earlier Malaysia one got postponed to the same weekend as the Indonesia one.

I apologise to the second organiser, hand over the cash and join the first organiser. Just over 90 cyclists take part (over a hundred signed up, but the postponement led to 10% attrition); there's support crew and cars too.

I cycle 19 km to the start point. I'm so early, i cycle to a McDonald drive-in for food. I help load up the bus to Malacca with bicycles then settle down for shuteye.

Solar powered
Day 2: 14 Sep, Malacca to Batu Pahat, 106 km. Overnight, my rear derailleur missed the rear wheel so much, it seizes up. I manhandle it to get it to work after gentle coaxing fails; no time for niceties now. At the start line, someone can't get her cyclocomputer to work. I give away my sole spare CR2032 battery and swap the battery for her. So, now my bicycle is lighter. Another cyclist loses his sole, which he fixes with duct tape.

Along the way, I see what is possibly the fastest man on this ride off his bike. A broken carbon spoke. Ok, I won't complain about by staight gauge steel spokes anymore. My inner tube holds up; first time I'm riding Presta valve in a rim made for Schrader.

On my fat tyres, I drop further behind. Yes, the world prefers thin people and thin tyres. I draft a roadie till she says her stomach hurt. So I pull her along. "Look at the houses, look for flowers, see that house, it's got three cars," I say, my feeble attempt to take her mind off things-

At the lunch point, I don't feel like eating much. I have four bananas, till the medic gives me her noodles. I do a good deed too; I return a guy's skullcap which  I found in the toilet. I say it wasn't in the cistern but he washes it anyway.

About 10 km out, I see a sign. Rest stop. Petrol kiosk. With Milo ice cream. Must stop.

Back on the road, I pass loads of roadies who've pulled over the roadside for cooling shade. It's a hot hot day. I trundle past them, pretending that I'm solar powered. I get to the hotel after 1 pm. And wait for my bag which is somewhere back there in a support vehicle.

Day 2, Batu Pahat-Singapore, 186 km. It rains, with thunder and lightning. We wait. Some support cars are ahead for an onsite weather report. It's still raining but without lightning. We get the all clear to cycle in the rain.

When the road is flooded. I plough through with my fat tyres. This is like a river crossing, without the gravel on the riverbed, just firm tarmac. When traffic passes on the other side, spray hits me full in the face. Hard. Just as well I'd managed to pop my sunglasses lens back; it'd popped out earlier.

M, the guy with the broken spoke, is back in the ride. Yesterday, he'd borrowed a car, gone home to another country to pick up a spare wheel. Today, he pulls a peloton of about ten along. W and I, on our mountain bikes, fall behind. My fat tyres sound like a flight of angry flies. But the buzz stops. Puncture.

I find the hole and match it to the tyre. A 2 cm nail sticks out. My second puncture of the ride. I fix it with my spare tube and we press on. Separated from the rest, we decide to skip rest and lunch. W passes me an energy bar.

My speed falls and I'm losing steering control. I look down. Puncture, my third. I have no more spare tubes with me. I settle down for a long walk. Moments later, a support car appears beside me, driven by M, founder of this charity ride. Thanks to W, we're on the right route after all!

M drives me to town, where there are two bicycle shops. Both are closed. P, the tech support crew, manages to find a fat tube for me, amidst the stock of roadie tubes. He shines a torch but I can't find what caused the puncture. M tells me to wait for another group to finish lunch, so I eat too. "You may ride with us, but we cycle slow," V says. 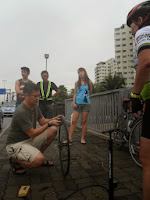 We set off together. Whenever the support cars leave us, I lead. At a rest point, a roadie tyre bursts. Just like that. P replaces the tube, inflates it and it bursts again. He checks the tyre and finds a cut. I suggest he boots the tyre and he does with a tyre patch. It works and we go on.

Support car leaves us to wait for another group. "Just go straight," were the oral directions. We come to a fork in the road. After discussion, we decide to go straight. But it doesn't feel right. I ask everyone to U-turn. We see M again, who points out where to go. And so I lead, past immigration and customs. Where to next? The written instructions are congratulatory in nature.

"Do you trust me?" I ask V. "Would you cuss me?" The answers to both are "Yes". So I lead again, and we reach the end point - the charity we are raising funds for - to applause. Some people ask me: "Why are you so late?" I should've reached hours ago.

But what adventures I've had. Three punctures on knobby tyres, when I've cycled a thousand km on slicks without mishap. But if I wasn't here, would this group have had a harder time with a cut tyre and navigating?

Email ThisBlogThis!Share to TwitterShare to FacebookShare to Pinterest
Labels: charity 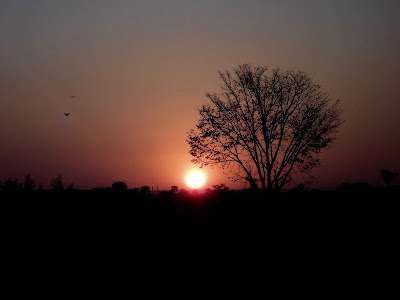